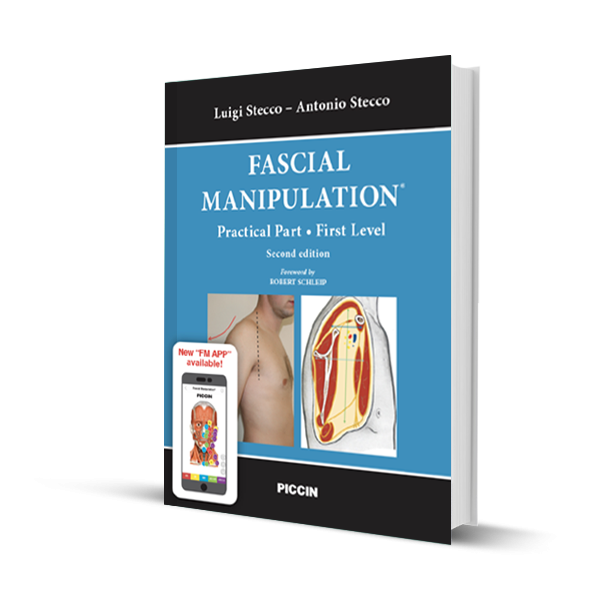 This book comes with code for FM application (Android and IOS).
Welcome to an exciting new field in musculoskeletal therapy: the fascinating world of fascia. Fascia forms a continuous tensional network throughout the human body, covering and connecting every single organ, every muscle, and even every nerve or tiny muscle fiber. After several decades of severe neglect, this ubiquitous tissue has transformed from the “Cinderella of orthopaedic
science” into an almost super star position within medical research. Starting with the first few years of this 21st century, the number of research papers on fascia in peer-reviewed journals experienced an almost exponential increase. The 1st International Fascia Research Congress, held at the Harvard Medical School in October 2007, was celebrated with worldwide acknowledgement.
Similar to the rapidly growing field of glia research in neurology, there is now a global recognition that this underestimated contextual tissue plays a much more important role in health and pathology than was estimated during previous decades.

As every medical student knows and every doctor still remembers, up to now, fascia has been introduced in anatomy dissection courses as the white packing stuff that one first needs to clean off, in order “to see something”. Similarly, anatomy books have been competing with each other in just how clean and orderly they present the locomotor system, by cutting away the whitish
or semi-translucent fascia as completely and skilfully as possible. While students appreciate these appealing graphic simplifications, with shiny red muscles, each attaching to specific skeletal points, frustration is certain when these simplified maps have almost nothing to do with how the real body feels and behaves, be it in medical surgery or during therapeutic palpation.

Muscles hardly ever transmit their full force directly via tendons into the skeleton, as is usually suggested by our textbook drawings. They rather distribute a large portion of their contractile or tensional forces onto fascial sheets. These sheets transmit these forces to synergistic as well as antagonistic muscles. Thereby they stiffen not only the respective joint, but may even affect regions several joints further away. If we look closely at the two powerful muscles gluteus maximus and tensor fascia lata, both insert into the dense fascial sheet along the lateral thigh, called the iliotibial tract. This tissue is part of the fascial envelope of the thigh, called fascia lata, whose tension influences not only the stiffness of the lateral hamstrings and quadriceps, but also severely effects the behaviour of the knee joint and the whole lower leg.

The simple questions discussed in musculoskeletal textbooks “which muscles” are participating in a particular movement thus become almost obsolete. Muscles are not functional units, no matter how common this misconception may be. Rather, most muscular movements are generated by many individual motor units, which are distributed over some portions of one muscle,
plus other portions of other muscles. The tensional forces of these motor units are then transmitted to a complex network of fascial sheets, bags, and strings that convert them into the final body movement. Into how many ‘muscles’ each of them has been divided
by our historical textbook authorities, depended more or less on their manual skills with the dissection knife. Their distinctions have little to do with the question about which movements these structures can perform.

Similarly, it has been shown that fascial stiffness and elasticity plays a significant role in many ballistic movements of the human body. First discovered by studies of the calf tissues of kangaroos, antelopes, and later of horses, modern ultrasound studies have revealed that fascial recoil plays in fact a similarly impressive role in many of our human movements. How far you can throw a stone, how high you can jump, how long you can run, depends not only on the contraction of your muscle fibers; it also depends to a large degree on how well the elastic recoil properties of your fascial network are supporting these movements.

If the architecture of our fascial network is indeed such an important factor in musculoskeletal behavior, one is prompted to ask why this tissue has been overlooked for such a long time? There are several answers to this question. One aspect has to do with the development of new imaging and research tools, which now allow us to study this tissue in vivo. Another reason is the degree to which this tissue resists the classical method of anatomical research: that of splitting something into separate parts that can be counted and named. You can reasonably estimate the number of bones or muscles; yet any attempt to count the number of fasciae
in the body will be futile. The fascial body is one large networking organ, with many bags and hundreds of rope-like local densifications, and thousands of pockets within pockets, all interconnected by sturdy septa as well as by looser connective tissue layers.

This ‘non graspability’ of fascia is also reflected in the use of many different terminologies throughout literature, describing which exact tissue types are included under the term “fascia”. Whether the thin intramuscular endomysium or the superficial fascia can be regarded as fascia (or rather as loose connective tissue), or whether only dense irregular connective tissue sheets should be included, seems to depend on the individual perspective of each author. Let me therefore introduce you to the newly proposed definition of fascia proposed at the first Fascia Research Congress. The term ‘fascia’ here describes the soft tissue component of the connective tissue system that permeates the human body. This includes not only dense planar tissue sheets (like septa, joint capsules, aponeuroses, organ capsules, or retinacula), which may be also called “proper fascia”, but it also encompasses local densifications of this network in the form of ligaments and tendons. In addition, it includes softer collagenous connective tissues like the superficial fascia or the innermost intramuscular layer of the endomysium.

While not everybody will be happy with this new terminology, it offers many important advantages for the field. Rather than having to draw – most often arbitrary – demarcation lines between joint capsules and their intimately involved ligaments and tendons (as well as interconnected aponeuroses, retinacula and intramuscular fasciae), fascial tissues are seen as one interconnected tensional network that adapts its fiber arrangement and density according to local tensional demands. This terminology fits nicely to the Latin root of the term ‘fascia’ (bundle, bandage, strap, unification, binding together) and is synonymous with the non-professional’s
understanding of the term “connective tissue” (in contrast to medical and biological scientists that include cartilage, bone and even blood as connective tissue).

The dynamic field of fascia research, to which the authors of this book contribute significantly, has shown in several ways that fascia is much more ‘alive’ than was previously assumed. Aliveness has at least two aspects here. One is its capacity to actively contract, as laboratory work with rat and human fascia by our group (Fascia Research Project, Ulm University, Germany) and
the group working with Ian Naylor (Bradford University, U.K.) has shown. The other aspect is its quality as a sensory organ. It has been shown that fascia is densely innervated with many sensory nerve endings including mechanoreceptors and nociceptors, which can become the source for acute myofascial pain syndromes. Fascia, if understood in the wider definition of the term described above, is one of our richest sensory organs. It is for sure our most important organ for proprioception and for our “sense of embodiment”.

The Stecco family, two of which are authors of this book, have become a driving force in this new field. Their first book “Fascial Manipulation for Musculoskeletal Pain” (Piccin, 2004) already attracted worldwide attention, and was quickly passed around from one myofascial therapist and bodywork instructor to another. It was therefore not a large surprise that their presentation at the Harvard Fascia Congress in 2007 was honoured with a special award for its scientific quality and depth of implications. I have no doubt that this new book, which not only deepens the theory and anatomical details of the first book but also presents a precise
description of their therapeutic technique, will have a major impact upon the whole field of manual therapy.

The authors present a novel model concerning the contribution of fascia to neuromuscular coordination through a specific topography of centers within the fascial network (centers of coordination, centers of perception, and centers of fusion). While this is a completely new model, it is presented in a very convincing manner. The evidence given in this book in support for this intriguing model, covers not only corroborating phylogenetic and neurophysiological details, but includes thousands of hours of anatomical cadaver research, performed by the original founder of this approach, Luigi Stecco, as well as his daughter Carla Stecco MD and son Antonio Stecco MD. Their diligent cadaver studies have resulted in several new anatomical discoveries and descriptions, published in peer-reviewed scientific anatomical journals. Anybody who has followed the emerging new publications on fascia
in the scientific literature in the last few years will have noticed these important contributions. This family team has studied fascial morphology and topography in detail, which is not only impressive but also resulted in the novel descriptions and findings that support the new model for neurofascial coordination presented in this book.

While these findings add great credibility to their work, further research will be needed to convince the scientific community of the full validity of this new concept. Whatever these coming years will bring up, whether in support of or in extension to the specific
predictions made in this historical book, these will be exciting years. The contributions given to the worldwide community by the Stecco family, as well as by several other fascia inspired groups, have already motivated some of the world’s leading experts in musculoskeletal medicine to enter the field of fascia research themselves. For example, Prof. Siegfried Mense, muscle pain expert from Heidelberg University, recently started to include the lumbar fascia in his innervation and nociception studies and already found some ‘very interesting details’ which he will soon publish. Similarly, Helene Langevin MD, renowned acupuncture researcher in Vermont, is currently using ultrasound to compare fascial morphology between chronic back pain and healthy people.

One of the treasures of this book is the large number of cadaveric photos showing topographical anatomy details of fascia. These are extremely well done and display some local properties that have never been described in such detail. Nevertheless, let me remind you, that these pictures, as beautiful as they are, show a much drier body than the one you are living in and the one you are touching in your clients. Please keep the fluid dynamics of the living body in mind and in your touch, when you turn from this book to the properties of fascia in a real living person. Fascia in living bodies is much more slippery and moist than you may tend to imagine.

If you are a beginner within the field of physiotherapy (or orthopaedics, rehabilitation, movement therapy, etc), be prepared that this is not a book to skim over lightly while watching TV. It is a gold mine of condensed information. If you mistakenly skip over a sentence, it may easily occur that you will miss this information later, when trying to understand the logic of the following pages, as there is not much redundancy in this book. Yet I give you my word that even most experts in this field will look at and read this book with immense excitement and a state of joyful discovery. While other books have been written on fascia from several different
angles, this one clearly sets a new standard. My congratulations to the authors for completing the most valuable and richest book that has ever been published on fascial manipulation; and also to your dear reader for having chosen this very book in order to learn more about a truly fascinating tissue and its manipulation.

There are no reviews yet.